No silver bullet for sustainable shipping

No silver bullet for sustainable shipping 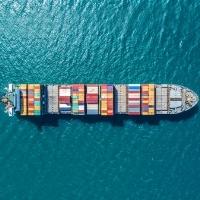 There is no doubting the ambition of International Maritime Organization (IMO) targets to reduce greenhouse gas (GHG) emissions from shipping. It is also aiming to reduce the total annual GHG emissions produced by international shipping by at least 50% by 2050, with the view to achieving net-zero carbon emissions in line with the Paris Agreement.

However, no single solution can provide the 'silver bullet’ needed to achieve these decarbonization ambitions in such a diverse industry. In fact, we all have a part to play in the decarbonization journey.

According to key exhibitors at Europort 2021, a combination of new fuels and new technologies will be essential if the shipping and offshore industries are to meet the decarbonisation targets.

So, what are some of the current options?

Let’s take a closer look. DNV’s Maritime Forecast to 2050, for example, predicts the rise of liquefied natural gas (LNG) as a marine fuel until at least 2030. DNV, an ever-present exhibitor at Europort, sees LNG as a bridging solution while shipowners consider their longer-term alternatives.

"The suitability of any individual alternative fuel needs to be estimated on a case-by-case basis taking into account many factors,” says Christos Chryssakis, Business Development Manager, DNV Maritime. "In terms of technical maturity, fuel availability, infrastructure, and volumetric energy density, LNG is the most feasible option for now, followed by liquefied petroleum gas (LPG). However, in the future, alternative fuels like ammonia, methanol and biofuel may gradually become the preferred options over LNG.”

A record number of LNG contracts

In 2020, 16% of all vessels ordered will run on LNG, and we are on track to exceed this in 2021 as 80 LNG-fuelled newbuilds have been ordered this year so far, says Chryssakis. In March 2021, a record figure of 21 LNG vessels were contracted in one month.

Electrical propulsion also on the rise

With Energy Transition as one of the main themes at Europort 2021, DNV also has insights to offer on the rapid uptake of electrical power for propulsion. DNV has entered several local coastal ferries in class which are capable of fully electric operations over short distances.

"Concerning the offshore wind segment, for example, all of the new service operation vessels contracted over the past year will have batteries installed in hybrid combination with a power system using another fuel source, typically Marine Diesel Oil (MDO). This is both improving the energy efficiency and reducing the fuel cost and emissions of the vessels. Several vessels under construction at European yards will be built for modular upgrades of the fuel system when such technology is available and commercially attractive.”

Data from the Maritime Battery Forum also indicates that over 130 battery-powered ferries are already in operation, with 90 more on order.

Fellow Europort exhibitor ABB has been a frontrunner in vessel electrification, having provided electrical systems on board vessels since the early twentieth century. Today, more than 1,700 ships employ ABB’s electric technologies. Increasingly, modern vessels are being built on the foundation of electricity, which expands their range of viable energy sources beyond traditional fuel to batteries and fuel cells, for example - both technologies in which ABB delivers specific expertise.

There have also been significant advances made in the area of fuel cell technology, offering another sustainable fuel option for ships.

Jostein Bogen, Global Product Manager for Electric Solutions at ABB Marine & Ports, said: "Fuel cells are responsive enough to be used as a general energy source for most loads on electric ships - and can be deployed in combination with other systems to yield additional benefits”. For example, vessels that operate predominantly on diesel engines could employ fuel cells to boost efficiency and comply with regulations in areas such as fjords and zero-emission ports.”

Here, ABB has offered a lead, with projects including Zulu, the inland cargo vessel developed for the second EU-backed FLAGSHIPS programme. Zulu will be the world’s first commercial hydrogen-powered cargo vessel which will operate along the River Seine in Paris and is due for delivery later this year. ABB has developed the fuel cell-based power and propulsion system for the newbuild, which will operate on compressed hydrogen produced by electrolysis.

Crucial considerations to drive down emissions

Understanding how alternative fuels are sourced is another important factor. "Ensuring the hydrogen powering the cell is sourced sustainably is a crucial consideration to drive total emissions down, and we have been encouraged by developments in sustainable hydrogen sourcing,” Bogen says.

However, acknowledging the need for a range of solutions, he also emphasises: "Hydrogen is only one potential energy carrier being considered.  Going forward, I think we will see companies using a mix of energy carriers depending on their needs.”

Europort therefore invites the industry to come together in November to consider the sustainable energy mix, in order to plan our energy transition journey jointly towards a more sustainable, carbon neutral maritime future.