Ammonia gets a fresh airing as marine fuel alternative

Ammonia gets a fresh airing as marine fuel alternative 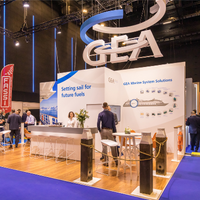 An open mind is recommended on selecting the fuels to help shipping achieve its targets on greenhouse gas emissions, according to GEA. Those discounting ammonia prematurely will be overlooking its successful use in shipboard refrigeration for over 150 years.

The marine systems supplier gave a thought-provoking presentation to an audience of ship owners, consultants and technology developers at this week’s Europort in Rotterdam, emphasizing that ammonia offered a practical alternative as a lower carbon emission marine fuel as shipping seeks to halve its GHG emissions by 2050.

Simon Kortleven, GEA Sales Manager Marine Refrigeration, said that the ammonia used for marine fuel purposes would be the same liquid as that routinely used for refrigeration on board fishing vessels, juice carriers and conventional reefer ships. In some cases, individual shipboard systems handle ammonia in quantities of 15,000-20,000 kgs, he pointed out.

"Some put question marks against ammonia on safety grounds and they are even frightened of it, but much of that is not rational. Like many other substances used on board ships, ammonia poses an explosion risk and is toxic; in high concentrations it is a health hazard. But ammonia is also in use on the world’s oceans 24/7 and it does not need extremely low temperatures or high pressures for storage.

"Yes, there would be some differences where safety was concerned to use it as a fuel, but the majority of guidance would remain the same. Piping, ventilation, gas detection - all of these are already accounted for in class standards, for example.”

GEA is known to be working on ammonia fuel supply systems to connect fuel tanks to main marine engines, although Kortleven did not disclose details. "We wanted to share knowledge at Europort, to show that ammonia is part of the low emission journey. There are a lot of different pilots involving alternative fuels around the world and this is an open race.”

Unlike other alternatives, GEA points out that ammonia is already produced in volumes of around 80 million tonnes a year worldwide, and bunkered at around 150 port locations around the world. "At the end of the day, fuel availability is going to be a critical issue for shipowners where new alternatives are concerned,” said Kortleven.